I’ve just completed another new watercolor painting. Unlike my last painting, this one took me only about a month to complete. As before, I took photos as I went along to track my progress. It was based on the photograph below, taken in Kings Canyon, CA. 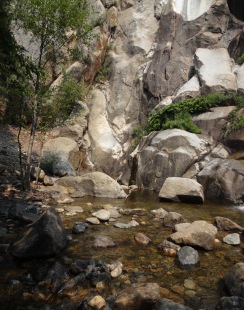 I began with blocking in the water with a yellow underpainting, as I felt the water was the most interesting and important part of the image. The water is transparent and ranges from muted green to orange, so I knew that yellow would be a good base coat. I actually use cadmium yellow a lot for my initial layers of paint when painting images of nature. Blocking in the yellow first also helps me separate the confusing pattern of rocks above and below the surface of the water. I then used resist to paint in the trees. The leaves of the trees would be significantly lighter than the rocks, so using resist was an easy way to preserve the whites. I then painted in the rocks and vegetation surrounding the trees and removed the resist. I needed to work quickly as leaving resist on watercolor paper for more than 1-2 days may damage the paper when you remove it. 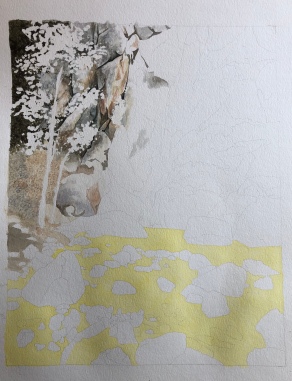 Next, I painted in large shapes of color for the rocks, again as a first layer. I varied the rock colors from blue gray, to browns, to even purples. Many more layers will follow. 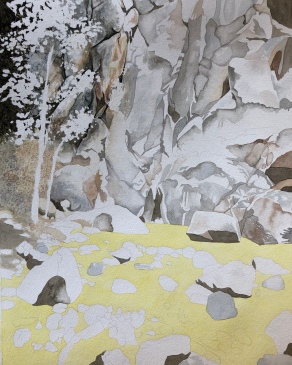 At this point, I took a break from the rocks to paint in my shrubbery. I again started with a base of cadmium yellow, then added many more layers with small brush strokes until the shrubbery started to look 3-dimensional. Each layer of paint got darker and darker, but I always made sure some of the initial color was still showing. The next several images show the progression. I ended up doing 8 layers of paint to complete the shrubs.

2 Responses to The Beginning